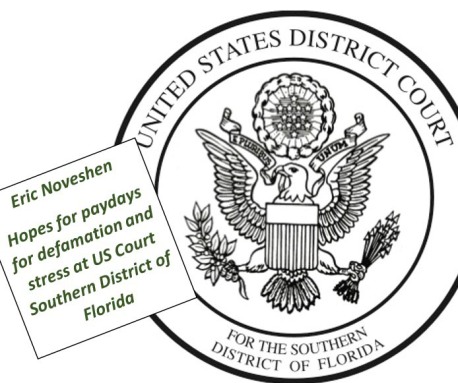 Eric Noveshen aka Broward County’s most brazen Pro Se litigant, most would say vexatious litigant with 42 cases under his belt, has mastered the art of the COPY-AND-PASTE-LAWSUIT. We thought that was reserved for lawyers practicing at least 5 years! It’s very practical for a man like Noveshen with multiple claims of fraud and judgments to fend off at a time.

In 2012 Noveshen was sued in Federal court with others for a pump-and-dump penny stock scam of a company he served as a consultant to Spa Capsule of Aventura, FL.  Allen Licht v. Ajene Watson et al. 2012

Noveshen can’t take a lawsuit like a man, own up to his mistakes and move on. That’s no fun for a vexatious litigant. What is fun is to counter sue and make the other side pay for daring to question your actions. Lucky for Noveshen he secretly brought his mother as the “bookkeeper” of Spa Capsule to doctor up the books as a protection plan in the event of a lawsuit. Allen Licht mentions this in his original complaint.

Given his history of scamming as sport, it seems that after filing the Licht lawsuit Noveshen concocted a plan to copy-and-paste parts of that lawsuit into a new lawsuit against the respected hedge fund Bridgewater Associates. Maybe he hopes to over litigate them to the point they will pay the “Pro Se Punk,” a screen name on Investorhub to go away.

Behold the works of legal fiction below. Two defendants guilty of the same crime. Seems a lot of people are out to defame Eric Noveshen and inflict stress on him. Poor guy. Or is he doing it to himself? Poor guy. 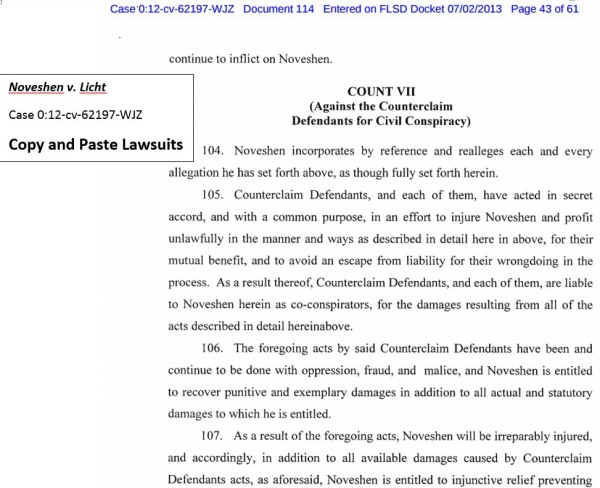