The special relationship between Eric Noveshen / Envision Capital and Boca Raton based Medgen run by Paul Kravitz. The kickbacks paid to Dworkin were by far no secret. Not only did those affiliated with Noveshen joke about it, the story played out in stock chat rooms like Investors Hub. 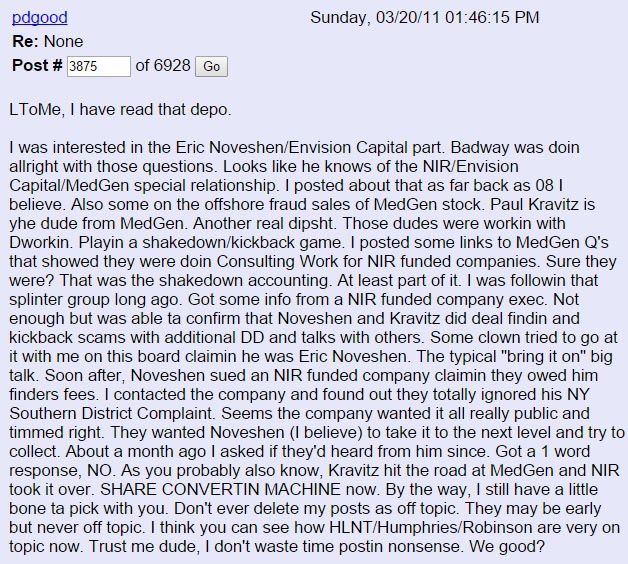 Medgen was a company producing natural health care remedies. The one it became infamous for was called SNORenz. The FTC thought Medgen made bogus claims about the potential of the product (see FTC complaint below) eventually Kravitz settled. Noveshen worked with Medgen until around 2008-09.

In the Matter of

MED GEN, INC., a corporation, and
PAUL B. KRAVITZ, individually and as an officer of the corporation.

2. Respondent Paul B. Kravitz is an officer of the corporate respondent. Individually or in concert with others, he formulates, directs, controls or participates in the policies, acts, or practices of the corporation, including the acts or practices alleged in this complaint. His principal office or place of business is the same as that of Med Gen, Inc.

3. Respondents have manufactured, advertised, labeled, offered for sale, sold, and distributed products to the public, including SNORenz. SNORenz is a topical spray that purports to reduce or eliminate snoring or the sounds associated with snoring by lubricating the vibrating tissues in the throat with a combination of oils, vitamins, and trace ingredients. SNORenz is a “food,” and/or “drug” within the meaning of Sections 12 and 15 of the Federal Trade Commission Act.