Eric Noveshen and his Mother Cheryl Wilson successfully manipulate the Broward County courts once again. After not paying their mortgage since at least 2007, the mother-son duo scored three more months of FREE HOUSING in Fort Lauderdale’s Victoria Park. Being a professional suer has its benefits.

On February 27, 2016 the Court granted Defendants Cheryl Wilson and Eric Noveshen yet ANOTHER extension of the foreclosure trial. It was set for March 8th, is now set for mid May, 2016. Another five-finger discount of sorts. 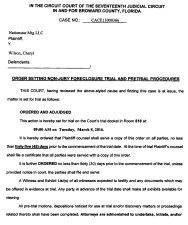