“The case was a complete failure by Loretta Lynch’s office,” this quote from financial reporter Teri Buhl on the case US v. NIR Group might be the understatement of the decade.

“At Dworkin’s sentencing hearing in Brooklyn, NY I got to see how the DOJ and SEC lawyers acted in this case. I was surprised by their egos given how little they accomplished. Government lawyers told Judge Dearie they were working hard to recover money for investors but they simply haven’t been able to do it. After the hearing I cornered SEC attorney Kenneth Byrne and a little man with horn rimmed glasses who was running the DOJ case to ask them face to face how they felt about their inability to get justice for investors and collect any money. DOJ attorney Daniel A. Spector scowled at my question and instead of answering it demanded to know my name and who I report for. I said my name was Teri Buhl and you should clearly know who I report for now. (Spector’s predecessor who started the NIR Group case had interviewed me in 2009 to get help finding NIR investors Ribotsky had lied to so I know the DOJ had been reading my reporting.) Attorney Spector’s ego kicked in and gave me a smug look saying they can’t comment on the case except what I heard them say in court. Now after a case is over the DOJ can comment and usually issues a press release. But in this case the PR girl for the DOJ admitted since there was no jail time for Dworkin there wouldn’t be a public comment. Meaning they didn’t want to promote a case that got so little for investors.

As I watched the SEC attorney and the DOJ boys leave the court room and slink into the elevator I did something I rarely do when asking subjects of a story questions. I asserted my opinion. I looked them both in the eye and said, “You should be ashamed of yourself for not doing more for the defrauded investors. You had this case handed to you an a platter.”

This blog relates mostly to the injustice of the financial fraud committed by Eric Lance Novesehen of Fort Lauderdale, Florida. Where does he fit into this SEC / DOJ colossal failure to protect investors? EVERYWHERE.

It goes on to say “whose identity is known to the United States Attorney.” That’s why Eric Noveshen received a federal indictment and was deposed in this case. What is fishy, shady, questionable is why the SEC /DOJ never prosecuted Eric Noveshen and even sealed his indictment.

Now approaching 2016, the SEC /DOJ can pat themselves on the back. Their failure to indict, fine or somehow penalize Noveshen for kickbacks and his role in stealing from NIR investors has allowed him scam and steal from investors, businesses and others for another six years! Time to take a second look at the web of fraud Eric Noveshen is still free to weave down there in Florida guys & gals at the SEC & DOJ, and Loretta Lynch too. 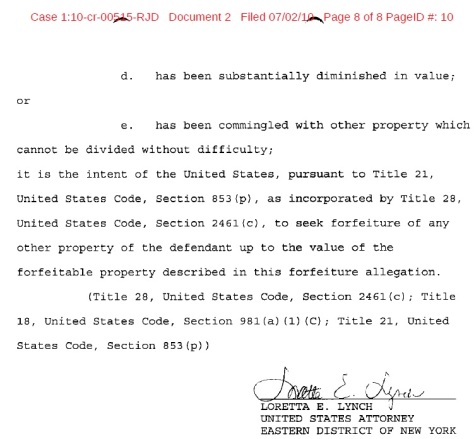