A viewer recently asked what it means when a business man is described as “off the wall,” as Eric Noveshen was described by Corey Ribotsky, former head of the now defunct NIR Group in a deposition: 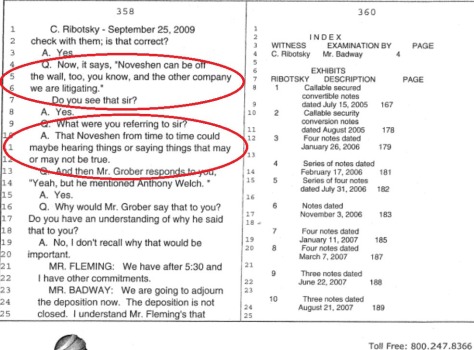 We would love to hear thoughts from the business community or anyone else. What did Corey Ribotsky mean?

For anyone interested in more info or updates on the latest on the governments efforts to collect the $14.5 million the NIR Group scammed from investors, check out this interesting read:

N.I.R. Group hedge fund founder, Corey Ribotsky, filed for personal bankruptcy leaving a whopping $36 million of debt unpaid a year after he settled with the SEC for investor fraud. Today I am reporting for Growth Capitalist that court records allude to the notion that the government knew Ribotsky wouldn’t be able to pay his multi-million dollar fine when they backed down from taking him to trial and agreed to a settlement in 2013.

2 thoughts on “Business Community What does “Off the Wall” say about a VC?”