This is a follow up to a blog posted in November 2015, “ABUSE OF FLORIDA COURTS, ERIC NOVESHEN’S 42 CASES“. That Blog was a follow up to a blog dubbed, “NOVESHEN WANTS PITY, PLAYS ATTORNEY.” Indeed he enjoys playing attorney, smirking at opposing parties, making degrading even personal remarks against Judges, attorneys and their clients. And boldly using the “Attorneys and Employees ONLY” door at Broward County Courthouse to bypass all the “non attorneys.” 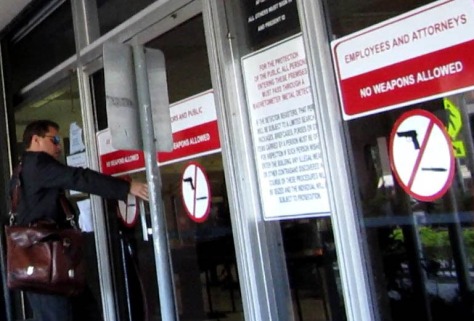 Now some websites are listing “The Law Office of Eric Noveshen” What a Hoot! (See Investors Hub.com for that reference). 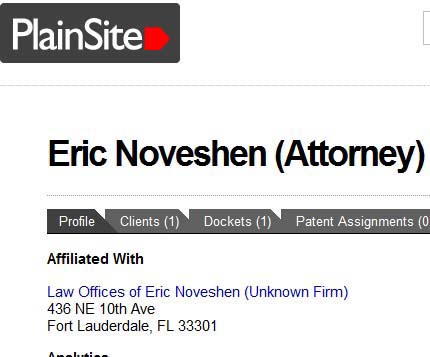 Eric Noveshen has often claimed he should just be given an honorary law degree. If that ever happened Florida attorneys your bar number just went way down in respect and value.

The worst kind of Pro Se litigant is the one who thinks he’s smarter than other lawyers and even the judge. Broward County’s version of Roy Pearson (the infamous “pants lawsuit”) where Pearson demanded $67 million because a dry cleaner fried his pants. Noveshen is almost that extreme. He abuses and uses local and Federal courts, it appears, to clear his credit card debts, to live free without having to pay mortgage or property taxes and to exact revenge on those he has stolen money from who dared try to collect. The sick part is he seems to enjoy it. Noveshen wrote on his Facebook, “Eric Noveshen is a legal eagle.” After getting The Honorable Judge Horowitz to requse himself – after Noveshen tried three times and finally got his way by personally insulting the Judge. 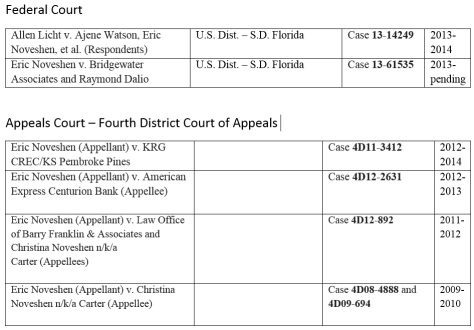 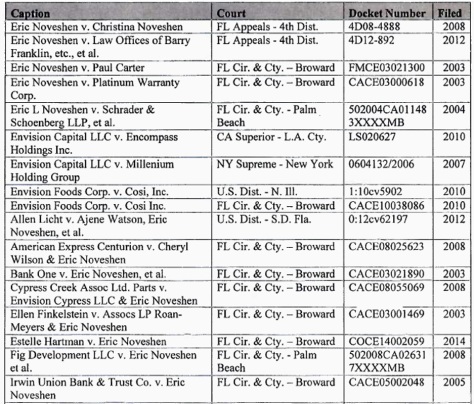 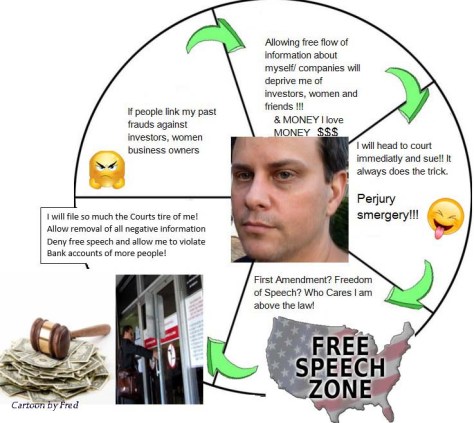 One of the latest in the 44 lawsuits is a legal action Noveshen filed in an attempt to have all facts surrounding his litigious behavior, court abuse, and all facts about his connection to penny stock pump-n-dump scams removed from this blog and from the entire internet. Easy access to facts about Noveshen’s  sketchy performance in the financial industry makes it harder, he argues, for him to obtain new clients. Go figure.